You can view the videos on HERE.

The point of this summary is not to replace the complete video and nor is it fully comprehensive, but rather the intention is to give a brief overview of proceedings so as to assist the reader in determining which sessions they would like to watch in full.

I would also strongly recommend visiting Marc's blog where he will be offering his first-hand insights into the experience.

The first day of the XXVII Mind & Life gathering includes an introduction and establishment of context by Arthur Zajonic, Diana Chapman Walsh and Richard Davidson. In the afternoon session Dr Marc Lewis, author of Memoirs of an Addicted Brain, spoke about Craving, Dopamine and the Cycle of Addictive behaviour.

Day 1 AM
Introductions and Context

Arthur Zajonc mediated the first session. He invited the Dalai Lama (HH) to make an initial introduction. His holiness discussed the commonalities between the 6 billion people on the planet. He said that science was very important to Buddhists, and while scientists have lots of knowledge, they don't know much about the mind.

One of the purposes of the meeting was to make a contribution to the world.

Desire must be there for movement. No desire, no action, no progress. His holiness asked the question if addiction, or an exagerated sense of focus, was always bad. Craving, was in essence, too much attachment, and there was lots of mental projection involved.

He mentioned that the meeting was part of a greater involvement by Mind &Life in the areas of desire and addiction as related to the concept of self, and that the institute had offered small research grants, and this also fit in with the larger realm of secular ethics.

He said that this was an opportunity for awakening and creating friends across cultures and disciplines.

Diana Chapman Walsh asked the question: Are we putting our effort in the right places? She spoke around our obsession with the internet, multitasking and social addictions. These could become destructive mind patterns, later to be adopted into "normal" society. She also pointed out that at a previous Mind & Life conference the principles of neuroplasticity had been discussed and that we could indeed train the mind.

Dr Davidson provided an orientation for the coming days. He pointed out that addiction is not restricted to substances. In contemplative traditions the roots of suffering are considered to be craving, desire and aversion, and these play important roles in addiction. Neuroscience teaches us how these neural circuits are co-opted, creating bias in perception and decision making. There are individual differences in vulnerability and some of these have antecedents in early life.

He spoke of the brain areas implicated in addiction using a diagram from NIDA similar to these: 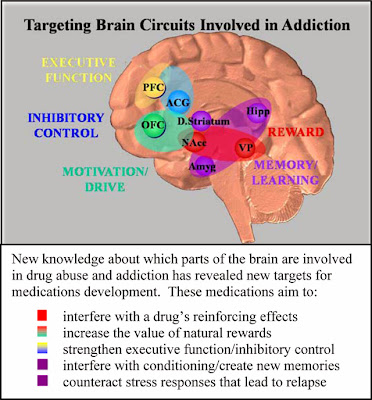 Dr Davidson discussed how memories become distorted and salience is increased and how disruption of the pre-frontal cortex (PFC) leads to the erosion of free will. In response to a question from HH he said this was seen as a consequence, not a cause. He used this diagram to show the differences in process between a "normal" and "addicted" individual:

The decreased activity leads to ethical impairments:
He also briefly discussed dopamine, but explained that others would discuss this in detail later.

He then quoted the Dunedin study that followed  1000 children from age 4-5 into adulthood, examining issues of delayed gratification. He discussed how interventions addressing self control might reduce  a panoply of societal costs.

Dr Davidson showed  a video of the marshmallow test with some children, while explaining the principles of delayed gratification.

Dr Davidson then explained how the various brain areas develop at different rates thereby creating a particularly vulnerable stage during adolescence. He quoted James Heckman: "There is a return of $7 for every $1 invested in quality pre-school programs."

He briefly discussed the very high levels of alcohol use disorder amongst Tibetans and the particular genetic vulnerability they may suffer.

In conclusion, Dr Davidson asked what are the major outstanding outstanding questions when it comes to addiction?
He ended his talk at this point.

Marc started his talk by showing some images of people who were affected by drug addiction so as to establish the human context.

Marc's outline was as follows:
HH asked if craving was always negative. The point was raised that addiction is similar to falling in love, but generally craving is considered a "bad" thing.

Dr Lewis discussed his own experience of addiction, which can be read about in his excellent book, Memoirs of an Addicted Brain.

Dr Lewis related the importance of environment and used the rat park experiment as an example. Here is a really neat comic strip about rat park. He then went on to give a brief description of the behavioural cycle of addiction: 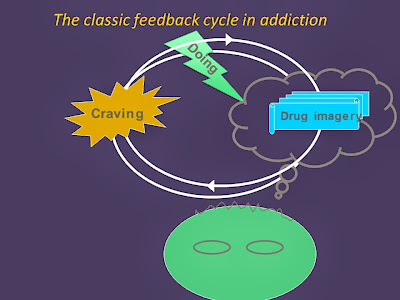 Dr Lewis went on to explain how this process is echoed in the brain through various neurological processes. He discussed how triggers lead to imagining which through the actions of Dopamine causes craving which causes planning, which leads to action, and this repeats in a cycle. 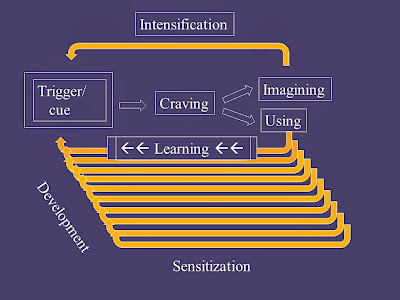 Dr Lewis then spoke about the relationship between this cycle and the Buddhist cycles of life and their ideas of suffering. He spoke specifically about 5 domains and how the relate to addiction:
He then focused on craving. Dr Lewis explained that neuroscience helps us understand why craving is so nasty. He explained briefly how dopamine motivates us. He then explained how dopamine narrows attention and creates desire at the same time, leading to delay discounting: 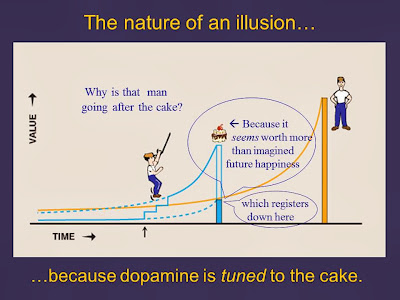 The discussion led to considering  issues such as restraint, and how not only the individuals are different, but also individuals experience different rates of exchange based on experience, learning and level of addiction. It was pointed out that addiction is a developmental process.

Dr Lewis then discussed how addicts lose trust in self through repeated failures at restraint. They eventually trust only in the drug, which also betrays them, and this leads to a miserable existence. Dr Lewis jokingly asked HH what the solution was. Taking the question seriously, the Dalai Lama suggested that to some degree the answer lay in understanding and environment.

He finished off by explaining that this is perhaps how it has worked for him.

Dr Lewis ask HH how one could develop compassion for self. HH commented that when he heard of the concept of self-hatred for the first time, he could not understand this. As he thought about it, he felt that there was an underlying self-love, causing the self anger because of failure to meet ones own expectations. Once there is a level of trust, there is an ability to accept the harsher words. Personally I feel that this echoes my personal belief that in treating addictive disorders the establishment of a good and trusting therapeutic bond is essential, and this trust that the patient develops in the therapist can later be transferred to self.

Dr Lewis expressed that this is perhaps why group work with peers can be so helpful, because of the shared experience and mutual trust. He then brought up the issue of shame and how painful it is to addicts. HH pointed out that in Buddhist context shame is seen as a sign of morality, but in the English word there is an irredeemable quality to it. What struck me was the approach to things that may be considered negative - it was more encompassing, seeing the good and bad in the concept.

Dr Halifax asked Dr Lewis what the role of remorse was. He explained that a small proportion of the addicted population disengage and cannot integrate their remorse into their narrative, and end up going in a circle. The discussion moved to ethics, and ethics as a direction. Dr Halifax wondered what the view of ethics and remorse within the 12-step programs. HH pointed out that with such a heterogeneous population it must be difficult to develop a single treatment modality.

The question was asked if a knowledge of the neuroscience could assist an addict in recovery. Dr Lewis commented that his book had resulted in lots of positive response from people who had benefited from it, which suprised him as it was not intended to be a self-help book! Dr Davidson explained how the concept of plasticity can help develop hope in those recovering from addictive disorders. Dr Berridge hoped that future knowledge and understanding can inform treatment.

Dr Davidson spoke about targeting specific circuits. He made the vital point that currently we can target specific areas of the brain more effectively through behavioural methods than through pharmacology currently available. In other words, we can develop specific training exercises that are designed to target specific brain systems.The point was made that mindful awareness can slow down or perhaps interrupt the addictive cycle.

Dr Zajonc suggested that perhaps there was a positive virtue that gets diverted or substituted by the delusion of the drug - perhaps this is the healthy attachment to the family? Dr Lewis referred to the book Drinking: A love story, and related how the drug can be the source of a relational comfort.

After a brief discussion around the benefits of AA, Dr Lewis discussed the rigidity of the cycle of addiction. He described very briefly some of the models of addiction, and expressed his hope that the discussions would help him understand craving as a part of the normal adaptive human experience, and perhaps addiction was a branch off this "normal" behaviour.

HH pointed out that the higher emotions, such as compassion, require training and awareness while emotions such as craving are more instinctive. Craving is seen as the root of unenlightened existence, with ignorance and distortion underlie it. He suggested that ignorance is perhaps the starting point, an ignorance of the deeper understanding of reality. If we are able to bring awareness we are able to understand consequence, and that can help us exercise restraint.

The meeting then drew to a close.