A Christian and an addict walk into a meeting... 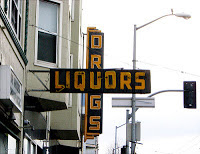 “Today one of the main criteria for a diagnosis of drug addiction/alcoholism is: continuing to consume alcohol or another drug “despite unpleasant or adverse consequences” (DSM). For the Christian martyrs the same criteria would apply. People of that time and place—Rome, 2nd century A.D.—could also say that this new Christianity was like a drug that endangered lives and that being a Christian had all the adverse financial, social, psychological and physical consequences that we now see in the lives of drug addicts and alcoholics. And yet Christians, of all ages, in spite of the consequences, continued to profess their faith… and continued to be eaten by lions.


Likewise, given contemporary social policy, adverse consequences befall those who abuse drugs. They lose the respect of their peers; they violate the expectations of family, friends, and colleagues; they miss out on educational opportunities; they have poor work performance and lose their job. They make harmful decisions. They "burn their bridges". Their health suffers; they have overdoses, and they die.

None of these predictions are of consequence to most “addicts”. Like the Christians who suffered and died for their faith, the addict has also made a choice… to lose everything for the “faith” in the euphoria of the drug experience. In this light it is not difficult to understand that the main treatment for alcoholics and addicts in America is religion as promulgated through the faith based AA Twelve Step programs.

Because we cannot have addicts going around talking openly about experiences like this:

“I watched him smoke it (heroin), and without any hesitation, I asked for a hit. The first hit that I took was strong. It wasn't like smoking pot. This was much more intense. It had a funny taste at first. I took another hit and held the smoke in and slowly released it from my lungs. At that moment, I finally found what I had been searching for--- the perfect high. The feeling ran through every pore and cell on my body. It was though God himself had scooped me up in his arms and brought me to heaven. It was just too good to describe; it was like looking into the face of God.” (The Alcoholism Addiction Cure, Chris Prentiss, 2005:130) "”

It was Jung who coined the phrase “Spritus contra spiritum” and described alcoholism in one patient as “the equivalent, on a low level, of the spiritual thirst of our being for wholeness, expressed in medieval language: the union with God.”

This raises the question: is addiction part of the very essence of who we are. Are we born to give ourselves over to something that we view as bigger than self?

From the religious perspective this is not an illogical conclusion. The Christian believes we are created to worship God. John Piper, a Baptist minister and the author of many books talks about “Christian Hedonism”. Piper says “We all make a god out of what we take the most pleasure in. Christian Hedonists want to make God their God by seeking after the greatest pleasure—pleasure in him.”

Piper agrees with and quotes the French philosopher Blaise Pascal:

"All men seek happiness. This is without exception. Whatever different means they employ, they all tend to this end. The cause of some going to war, and of others avoiding it, is the same desire in both, attended with different views. The will never takes the least step but to this object. This is the motive of every action of every man, even of those who hang themselves."

Marx said that “religion is the opiate of the masses”. Is the desire for spiritual connection fulfilled by a relationship with the drug and the drug culture? In a world where religion is no longer seen as the norm, are we looking for a new religion? One we are prepared to die for? Just as the religious seek a relationship with God at all costs, do the addicted find that relationship in their drugs?

Certainly there are similarities. It was Jesus who said "Whoever loves father or mother more than me is not worthy of me, and whoever loves son or daughter more than me is not worthy of me." Without getting into the theology of that statement, we understand the principles: Forsake the relationships that mean the most for a relationship that transcends our earthly connections. There are other similarities between addictive disorders and religious experience: ritual, commitment, sacrifice, a new identity, an abandonment of past behaviours and connections, evangelical passion, continuation in spite of adverse consequences and the such.

The controversial field of neurotheology seeks to examine the changes in neurobiology caused by the religious commitment that could result in the choice of death over renunciation, or, similarly, the pre-existence of structural brain differences that may pre-dispose the individual towards such commitment. The reductionist or materialist point of view is that religious experience is nothing more than the results of predetermined neural activity that arises as a result of genetic, ecological and/or evolutionary pre-disposition.

In his book The God Gene: How Faith is Hardwired into our Genes, Hamer proposes that a variation in a gene known as VMAT2 is the "God Gene", and through the effect of this gene on dopamine, serotonin and norepinephrine we are hard-wired for transcendence. Anyone with even a fundimental knowledge of addiction neuroscience will recognise the same monoamines mentioned as being amongst the usual suspects in addictive disorders. Indeed they are closely linked to the motivational and reward system.

William White in an essay entitled The Role of Spirituality in Substance Abuse Prevention, describes spirituality: "A heightened state of perception, awareness, performance or being that personally informs, heals, empowers, connects, centers or liberates". Once again, this sounds like drug use to me, although for those suffering from addictive disorders the drug often reveals itself to be an imposter, in much the same way as the abusive marriage partner reveals their true nature.

So, if as Dr Wilmot and the evidence I've listed above suggests, addictive disorders look a lot like the religious experience, did the early Christians, and those willing to suffer for faith, or any other cause, suffer from a disease? Freud said that religion was "mass obsessional neurosis". There has been some suggestion that radical religious experience is linked to temporal lobe epilepsy, this is by no means proven, and is certainly not true for all religious experience. Similarly we often see religious fervour in the manic and schizophrenic, but this is usually easily differentiated from the non-pathelogical religious commitment, even if the behaviour is no less outside the boundaries of what many would consider normal.

In spite of the promotion of the disease model, the traditional treatment models have acted as though the drug experience is all the more unacceptable because it is an imposter, taking the role of God in the addicts life. AA and 12-step programs seem to uphold the view of William James - "The only cure for dipsomania is religiomania."