Famous for Being Homeless 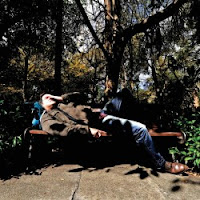 I went viral. I wrote a seemingly innocuous anonymous letter to the press about being homeless and it received over 60 000 views and 700 shares from one facebook page alone. It was suggested that I did not exist and that the journalist who read out my letter on air had made me up, so I decided to "out" myself. Since then I have been sought for interviews in the press and on radio. I am not necessarily comfortable with all this media exposure, but if it can help give the marginalised a voice, I will use it. Hopefully this will help me bring the issues that are on my heart regarding addictive disorders and mental health into the public consciousness and promote debate. Here is the story:

Recently there was a proposal to remodel benches in the public space known as the Company Gardens in Cape Town. The article in the local newspaper reported: .

"Councillor Dave Bryant said Government Avenue was one of the city’s most well known attractions and that there had recently been a strong call from the Company’s Garden steering committee to inject more vibrancy into the area.

He said some of the benches did not have a bar in the middle and therefore encouraged people, mostly vagrants, to lie down and sleep rather than sit."

“By involving designers and artists in a collaborative process, public benches can become more than just furniture.
“By utilising creative inspiration and inventive design it is possible to create pieces of more functional art which can also help to create a safer and more vibrant environment in a public space like the Company’s Garden.”

In response I wrote the following:

I have been homeless. I wouldn’t have thought I would end up as being a vagrant and you probably wouldn’t guess, by looking at me now, that a few years ago I was the person you crossed the road to avoid. From my experience I can tell you that when you are homeless things take on a new meaning. The 1,5 litre Coke bottle left lying on the side of the road is not litter. It is R2. R2 is not for the car guard. R2 is half way to half a loaf of bread. Half a loaf of bread is a meal. A meal is not a family occasion or something enjoyed in front of the TV. It is a break from the pangs of hunger. It is a couple of hours of forgetting that you do not know where your next meal will come from.

And now even that small pleasure is being removed from the homeless who frequent Cape Town’s Company Gardens. There a plans afoot to replace the “problematic” benches that “encourage people, mostly vagrants, to lie down and sleep rather than sit”, according to Counsellor David Bryant. The language he uses is upholstered in euphemism. The unupholstered sharp edge is that the homeless shouldn’t be allowed to sleep on benches, even though this is a public space. The way people enjoy public space is becoming more and more prescriptive. For the wealthy who have gardens and homes to retreat to, a walk in the park is, well, a walk in the park. Not being able to lie on a park bench may seem insignificant. For the homeless it just adds to the strain of day-to-day survival.

The problem with living on the street is that it keeps you living on the street. You become more and more removed from what is considered normal. The things we take for granted are no longer easily available. Like water - water to drink, let alone wash in. Think about it – where would you go to get a drink of water? More and more taps have had the handle removed so that vagrants do not loiter at the street equivalent of the office water fountain. Washing is even more difficult. How would you wash if you lived on the street? That’s why the homeless smell. Not because we want to, but because we have no other choice. And bodily functions? How many public toilets do you know of that are not in shopping centres? There used to be the station toilets, but these days stations have security guards that prevent access unless you have a ticket. Do you have any idea of the indignity of having to crap behind a bush? In the city?

The Company Gardens are an amazing place for many people, but for the homeless they have a group of resources that they seldom get access to in a single environment – toilets, a water fountain, a soup kitchen (at St George’s Cathedral), a place to be amongst the rest of society and a bench to sit or lie on and get a few minutes respite from the struggle for daily survival.

One of the greatest desires of the marginalised is to feel normal. To be treated like the rest. To enjoy the same real estate they enjoy. When I was homeless I was painfully aware of the things that separated me from the people around me. The dirty clothes. The dirty hair. The rank smell. The pangs of hunger. The shopping bag holding all my worldly possessions. The constant harassment by security guards and over zealous neighbourhood watch members. Your lack of greeting and eye contact. I was aware of these things and they hurt. These are the things that keep people on the street, that move them further from the belief that they can belong, that they have a contribution to make.
When the city redesign and replace benches with the soul motivation being so that people cannot lie on them and try to hide this by calling it “functional art”, as Mr Bryant does, they insult artists. To say that by preventing people (read vagrants) from sleeping on the bench by designing these new benches they are somehow are creating “a safer and more vibrant space” is insulting to the public’s intelligence. It is one of many steps intended to create a more sterile and less diverse place for the privileged. It is another brick in the wall that divides the “haves” from the “have nots”.

If there is a shortage of benches, put in more benches. If people are sleeping on them, let them lie. You see, these are not the real problems. The real problem is the vagrants. The truth is many would prefer not to have them there. They remind us that our own success is often based on luck or circumstance. There, by the grace of whoever, go you. I know. I’ve been there. These sleeping vagrants are monuments to the failure of our public representatives who have been sleeping on their back benches. By denying the problem instead of accepting homelessness as inevitable and waking up and catering for it, our authorities are perpetuating the problem. By hiding the homeless, we are becoming blind to their plight. We forget that there are people less fortunate than ourselves. We can continue with our privileged existence without distracting reminders of the less fortunate.

As a former homeless person camping is not high on my list of hobbies, but every now and then I’d like to lie down on a park bench and remember that once this was the only place I could dream of a better future."

The good news is that a few days later the proposal was withdrawn and a lot of people came forward to help various homeless organisations. Hopefully when I confront issues of addiction and harm reduction services this coverage will have given me some credibility.

Further coverage of the story can be found at these links: