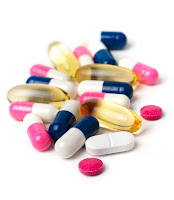 IMPORTANT: This article deals with treating post-detoxification addicts who have been weaned from their drug of choice under medical supervision and those who don’t have a co-morbidity that presents an immediate danger to themselves or others. I am also not talking about those who are on a supervised substitution or aversion program. We must also accept that there is a minority amongst us for whom a life free of medication is an unrealistic goal. We should recognise this and not exclude these people from the recovery process.

PDF Version
Many have come to accept addiction as a disease, and one of the down-sides of this belief is that addiction can be easily treated via pharmacological interventions. Accordingly, many recovering addicts are dealing with their symptoms via medical intervention. I think this is a mistake. Here’s why:

The Problem
When in early recovery, every addict is going to suffer an array of “symptoms” which could very easily be strung together to present a seemingly valid diagnosis of a multitude of disorders which in “normal” circumstances would require medication. The particular group of symptoms and severity may be influenced by a number of factors such as drug of choice, period of abuse, support personality, predisposition, circumstances, expectations.


Almost without fail there will be depression, abnormal sleep patterns, mood swings, obsessive behaviours, reduced pain threshold, lethargy and more. This is to be considered normal for the recovering addict.
Anne Wilson Shaef said this about early recovery: “Something that required the best of you has ended. You will miss it.” This is not only superficially true, but also true to a much deeper level. The narcotics have had a profound effect on all areas of the addict’s life.

Physically – Biologically and chemically – even the mildest of narcotics change the way our body functions. They must, otherwise there would be no purpose in taking them. So consider the addict who has taken massive doses – doses that would often kill a first time user – repeatedly over an extended period of time. When they stop, they will miss that thing that required the best of their body, mind and soul.

In today’s world we tend to treat each of these three areas – body, mind and soul – in the same way: symptomatically and usually via chemical intervention.

Balance – Body and Mind
High school biology teaches us that they body works on an intricate system of balances and feedback systems. Addiction destroys that balance. It is only because of that initial balance that the drugs had such a profound effect, but once the balance is lost the initial high is an elusive dream. Most poly-drug abusers will get mystical about the precise combinations they developed just to feel normal. It takes years to perfect addiction. As soon as the massive “weight” of the abused substance is removed from one side of the balance, the body starts see-sawing madly to try and regain some form of equilibrium. That oppressive weight was not put there in a day; it was slowly built up over the period of substance abuse. And now the weight is gone. Instantly. The body needs time to regain the balance. Physically the addict needs time to let the equilibrium return without putting further pressure on the system or disguising the symptoms. This is addiction 101, tolerance and withdrawal. But it goes further than the mere biochemical scales of balance and early withdrawal.

Psychologically the addict will invariably suffer from some sometimes very severe symptoms such as depression, mood swings and cognitive impairment. This is part of their recovery and is the rule, not the exception. This may be the result of a chemical imbalance, or it may be an imbalance of the mind or soul. Right now, it’s unclear.

Into the void
To the uninformed it may seem that life would surely get better once the addict is clean, but if it was so simple relapse would not be such a regular occurrence. If we took a normal (a non-addicted) person and deprived them of their lifestyle, cultural habits, friends, hobbies and only source of mental release, we would expect them to become depressed. This is what happens to the addict.

For every addict there is the particular set of sub-culture behaviours that are aligned with the particular drug of choice: the meth user’s 3 day after-party, the e-bunny’s rave culture, the coke-head’s high-flying lifestyle, the heroine junky’s criminal means of meeting his need. These are generalisations, but each drug has a community which users belong to. Even the most private of addicts who hides his addiction looses a lot: The rush of the illegal, frantic meetings with the dealer, the thrill of the double life they hide from even their closest companions, the ritual of preparing for ingestion. Their addiction allows them to create their own private world. And that’s before they’ve even had the chemical benefit! When the addict stops using they are no longer welcome. Membership expired, entrance denied. There is a massive void in their life.

To borrow from the British: when disembarking from the train of addiction to alight on the station of sobriety, “Mind the Gap!” Especially since this train is an express train and it’s usually still moving!

The Treatment?
If you accept what is said here, you may come to the conclusion that there is an obvious solution: The addict is suffering medical symptoms due to the imbalance created by their addiction, and these could lead to relapse, so take away the symptoms. Reduce the imbalance by using a counter balance, bridge the gap, help make the void seem less daunting – MEDICATE. Treat symptomatically until all the problems disappear, or at least become “bearable”. Let’s help the addict over the initial hurdles – after all it’s better than having and addict on our hands. But is it? Are we really helping the addict? Or are we feeding their addiction? I believe that no-one is in a position to answer that question during the early stages of recovery.

Why not:
I believe that all too often medical professionals medicate the symptoms the recovering addict is suffering at great cost to the addict. Here’s why:

We need to give the body and mind time to do what it does better than any other doctor or medicine can: heal. The human body has been created in such a magnificent way that it more-often-than-not heals itself, physically and mentally.

In the early stages of recovery we don’t know if the symptoms are real – the result of some long-term medical condition -or as the result of the body trying to establish its’ own equilibrium. When we add outside chemical intervention we further confuse things and delay the process of recovery and often deny the chance to make an accurate diagnosis based on that individual’s natural equilibrium.

For example: The body needs more sleep to heal, so the addict is constantly exhausted, forcing them to sleep 12 hours a day. The body is weak and heart overworked so exercise seems impossible and old levels of fitness seem unattainable. All these symptoms are there for a reason – to help the body recover.

Mentally, many addicts became addicts because of their inability to deal with life’s issues. Often the drug of choice was a form of self-medication to avoid dealing with these issues. Now these same issues are there again and still may seem impossible to deal with – until the addict actually starts dealing with them. This is why many addicts find help from a 12-step program or professional counselling.

If we treat the symptoms that the recovering addict displays through medication, the symptoms may all but disappear. But does this help the recovering addict? I think not, because although life may seem easier and the return to normality faster, the body mind and soul have not really healed. Relapse is around the corner – as soon as the drugs are gone, the drugs will be back!

Healing, growth and the character required to conquer addiction take time and effort. There are few short cuts.

My Advice
I believe that my experience has shown that after detoxification the addict should receive no, or as little as possible, medication to alleviate the symptoms as described earlier. My advice to all those dealing with recovering addicts is to avoid all medication for at least 12 months in recovery. Give the body time to find its balance again. Understand that the addict is going to require this time, at least, to begin to operate as a “normal” contributing member of society.

Rather have two years of struggle, allowing the body and mind to heal, and move on to enjoy a life-time free of addiction and prescription medication.
Posted by Shaun Shelly
Email ThisBlogThis!Share to TwitterShare to FacebookShare to Pinterest
Labels: Early Recovery, Medication, opinion
Newer Post Older Post Home