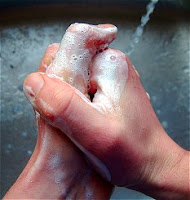 A brief overview of Obsessive Compulsive Disorder for addictions counsellors

PDF Version
When you attempt to eliminate risk from your life, you eliminate along with it, your ability to function.
- Fred Penzel

I once watched a man attempt to cross Belgravia Road. He approached the traffic light, turned away. He approached it again, and again he turned away. He repeated this process at least six times. Eventually he reached out to touch the button that would activate the pedestrian crossing light. Then he withdrew his hand, wiped it vigorously on his shirt and attempted to do it again. Again he withdrew. The next time he covered his figure with his shirt, but still he could not touch the button. The car behind me hooted, and I was forced to pull off. I was not convinced that this man would ever make it across the road. Such is the nature of OCD – obsessive, compulsive and utterly debilitating.

OCD is a relatively common disorder with a lifetime prevalence from 2-3%. OCD usually begins before the age of 25. Some studies have reported onset as young as 9.6 in girls and 11 in boys (Swedo et al, 1989) while others report full diagnosis at 21 for boys and 22 for girls. This would indicate the likelihood of a bimodal distribution of age onset.

There is no racial or ethnic differentiation although different ethnic or religious groups may express different obsessions according to schema. OCD is equally common to both sexes, although pregnancy has been known to precipitate the onset of symptoms.

29% of patients in a study by Rasmussen and Eisen reported a precipitating event, but in the majority of cases there is no clear indicator of what may have triggered the onset of symptoms.

There is little concrete knowledge as to the causes of OCD. Recently, however, children have been seen to develop OCD as a result of an autoimmune response to group A beta-haemolytic streptococcal infection, and investigations into this may bring about a deeper understanding as to the causes of the disorder.

Signs and Symptoms
Those who suffer from OCD have recurrent thoughts, ideas, images, impulses, fears or doubts. These obsessions emerge from, apparently, nowhere and seem to increase with attempts at resistance. On the compulsive side, sufferers feel compelled to touch, count, check, arrange things symmetrically or wash their hands repeatedly.

In spite of recognising or being made aware of the ridiculousness of their behaviour, and even though their lives are paralysed, patients are unable to stop.

Often the themes for the obsessions are violent or sexual in nature, which can add to the shame of the disorder and the increasing fear of acting out, and so they may become increasingly isolated.

Diagnosed OCD sufferers who receive treatment may be as low as 7% (Nestadt et al.,1994). Most sufferers delay seeking treatment long after onset, often due to stigma or embarrassment and the perception that little can be done to improve the symptoms. As with most psychiatric disorders there are both pharmacological and psycho-social interventions.

5-HT uptake inhibitors have been shown to be effective in the treating of OCD. Examples of this are the non-selective serotonin uptake inhibitor clomiprmine and the SSRIs citalopram, fluoxetine, etc. 40-60% of patients will respond to these forms of medication. In some cases, particularly in Europe, multiple SSRIs are being prescribed and some success has been reported on the combination, but research is as yet inconclusive.

With these treatments it is very rare that all symptoms will completely disappear and benefits are only noted after 6-8 weeks.

Those that do not respond to these first-line drugs may respond to certain anti-psychotics.

In the case of severely anxious patients a benzodiazepine may be prescribed.

The only evidence based psychotherapy proven to work with OCD is Exposure and Response Prevention Therapy. Most literature is limited to cleaning or checking rituals. Only about 50% will benefit from therapy in the absence of medical intervention. 25% of those that respond to therapy will show no lasting benefit.

Although there are a number of negative reports about psychotherapy in OCD, these are misconceptions. There are, however, some contra-indications that predict a poor response: severe depression, hypomania or mania and schizotypal personality disorder.

In the words of Jimmy Carr: “There is a thin line between Obsessive and Compulsive; it’s called a hyphen.” This disorder may often seem amusing to outside observers in its absurdity, but to the sufferer it is more debilitating than physical pain. Although there has been a better prognosis for sufferers since the 1980s, the disorder is still poorly understood. New research into associated disorders such as addiction and other compulsive disorders may unlock the areas of the brain responsible for OCD, bringing about an effective and reliable cure that will allow sufferers to do what they’ve always wanted - simply get on with their lives.