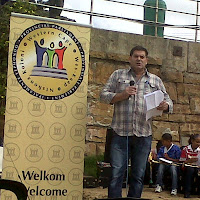 By Shaun Shelly
This is a speech I delivered at a public function held to celebrate Human Rights Day in South Africa. Addicts are one of the most marginalised groups in society, not even enjoying the right to freedom or medical care:

The Bill of Rights is a cornerstone of democracy in South Africa. It enshrines the rights of all people in our country and affirms the democratic values of human dignity, equality and freedom.  It places a responsibility on the state to respect, protect, promote and fulfill the rights in the Bill of Rights.

It further goes on to say everyone is equal before the law and has the right to equal protection and benefit of the law. We are also told that we have a right to freedom and a right of control over our own bodies. We also, apparently, all have a right to healthcare.

There is, however, a group that has been marginalised and seems to have slipped between the cracks. Those who suffer from the condition known as addiction. Medically addiction is considered a chronic relapsing disorder of the brain, and the addict is regarded as someone in need of care. In society the addict is seen as a product of their own bad choices who deserves to suffer the consequences. But if we believe in the Bill of Rights, we must consider the addict.

Take for example the story of a young girl who was caught with a minor quantity of drugs in her possession. She was undoubtedly an addict. She had turned to drugs due to difficult life circumstances. She did not choose to become an addict, in spite of what many may think. Instead of being referred to health services, instead of receiving treatment, she was sent to prison for months. Has this helped her? No, it has scarred her for life, and increased the length of the course of her condition. Has it helped society or the community? No, it has added an extra burden.

Earlier this week I was in court presenting evidence in mitigation of sentence. This particular individual has a heroin addiction, and as part of his treatment he is on an opioid substitution medication. Research tells us that without this medication he will suffer painful withdrawals and will most likely relapse into full-blown heroin addiction. Along with this comes the need to interact with criminals to aquire his drugs, the risk of drug-related medical conditions and a number of other social ills. In spite of having a medical diagnosis, and in spite of the risk, he is unable to continue his medication while incarcerated and may not undergo psycho-social treatments in prison.

In my opinion both these cases are in direct opposition to the Bill of Rights. We are refusing people who have a medical condition treatment. That is wrong. But worse still, we are criminalising their condition. We are, effectively, making it illegal to suffer from addiction.

You may say that addicts choose their disease. That is not true. Over 50% of all adolescents will at some time or other try illicit drugs. Many more will try alcohol. Most will never become addicted and most will therefore never face consequences for their drug use. But for some, due to genetic disadvantage, economic disadvantage, social disadvantage, familial disadvantage or some other circumstance, the initial casual use of drugs will turn into a disease that kills more than any other disease: Addiction.

Does the diabetic get refused treatment because they had a sugar- rich diet? Of course not - that would be wrong!

So why are addicts automatically regarded as criminals.  By throwing those who are suffering from addiction into jail only because they are caught in possession of illegal substances is counter-productive and creates significantly more of a problem than it solves.

I am not suggesting that drug addicts are not punished for breaking the law – driving under the influence, stealing, abusing others or the like. Like the rest of society they should pay the price. To, however, criminalise someone for possession is not helping any one.

During the holiday period last year LEAD SA launched their Drug Watch Campaign. Towards the end of this campaign they proudly announced that over 8000 people had been arrested and over R5million of drugs had been confiscated. This is not good news. Once the major drug hauls are removed this means that the average value of the drugs seized was less than R400 per person! These are hardly high-flying drug dealers – these are our children, our friends, our associates who happen to suffer from this thing called addiction. What these figures do tell us is that whatever we are doing to combat addiction, it is not working.

These arrests are contributing to the societal issues that breed addiction:

·         The police resources wasted on attaining and processing these arrests are significant with little return. Police will tell you that many are repeat drug offenders because their addiction drives their need and potentially getting caught is not an effective deterrent.

·         To process all of these cases will take the courts well over 200 court days, tying up much of our already strained judicial system. Added to this is a low conviction rate, and often it is only the repeat offenders or those who have no representation who are convicted – most of the dealers are escaping conviction.

·         Add to this the fact that those who do end up in prison will be schooled in the number while incarcerated and will return to the streets not only as addicts, but also as gangsters.

·         I have met many people who have fought the battle against addiction, fighting hard for their sobriety, only to be held back by a criminal record for drug related crimes.

·         Perhaps, most importantly, we need to see who is getting arrested. There are addicts in all sectors of society, but it is not the wealthy addicts who are getting arrested. Doors are seldom being kicked down in Bishops Court or Constantia. It is the previously disadvantaged and the poorer communities who are being targeted.

This is not justice. It is criminal. It not only undermines the human rights of the chronically ill, but it also undermines society! The United Nations Office on Drugs and Crime says: “There is considerable evidence that effective drug dependence treatment offering clinical interventions as an alternative to criminal justice sanctions substantially increases recovery, including a reduction in crime and criminal justice costs. This improves the outcomes of both the person with the drug disorder and the community.”

Any family who has had first-hand experience of addiction will know that there is little hope of access to treatment. Daily I hear how the psychotic patient is turned away from a hospital because they are an addict. Daily I hear about the addict being refused the rights we are supposed to enjoy, simply because they are an addict. The waiting lists for affordable treatment are long.  It is time to wake up.

In 2001, Portugal took the radical step of decriminalising drug use.  When someone is caught in possession of drugs they appear before a social worker and psychologist who gather data that enables government to improve communities and socio-economic conditions, and the person is offered treatment. 10 years later, the results speak for themselves:

This goes to prove that there are viable alternatives.

So why do we continue to do what does not work?
It is politically expedient. Communities are suffering due to the prevalence of illicit substance use, and particularly due to the criminal activities that are involved in the acquiring of drugs and the gangsterism that so heavily depends on the drug trade for survival, and so we take comfort in seeing headlines that proclaim large numbers of arrests and big values of confiscated drugs. It makes us feel a little safer and that earns votes.


Secondly, our local Police are expected to meet certain performance criteria that are based on invalid measurement tools. Each Police station is expected to deliver a certain number of drug arrests per month. These figures (along with other arrest rates) are what our station commanders live or die by. This makes absolutely no sense. By stopping major dealers from operating in an area, station commanders are, effectively, guaranteeing poor performance evaluations. It is much better for performance ratings to patrol the areas around these dealers and stop and search those walking back home after scoring.


There are other reasons as well, but essentially for the sake of political posturing we are trampling on the very bill of rights we so proudly celebrate at this time of year. We should hang our heads and think of one of the most disadvantaged of groups: the addict. The addict who is denied the rights we are holding up for the rest of the world to see. Until we treat addiction as a medical condition, until we stop criminalising someone simply because they are neurologically disadvantaged, until we are able to offer treatment to our addicted children, until we are able to break the cycle of addiction that is getting worse with each generation, until we can treat addicts with dignity, until we can guarantee not only their right to freedom, but their right to freedom from drugs, we have no right to celebrate.
Posted by Shaun Shelly
Email ThisBlogThis!Share to TwitterShare to FacebookShare to Pinterest
Labels: addiction, crime, public policy, speech, treatment
Newer Post Older Post Home